This was originally posted on https://www.essence.com/entertainment/residue-merawi-gerima-film-washington-dc-array/ along with the image used.

Gentrification is a jarring circumstance that’s been permeating major American cities, more particularly Black communities, for decades. The act of changing the character of a neighborhood via affluent residential and demographic shifts yields a different kind of culture shock, especially when one returns to so much change in their hometown after leaving. Cultural landmarks and people that once had a distinct presence are now starkly different than what memory communicates.

Washington, D.C. is no stranger to this continued erasure. The National Community Reinvestment Coalition revealed in its latest study that although the nation’s capital is ranked 13th on the list of “most intensely gentrified” cities from 2013 to 2017 (a drop from ranking first from 2000 to 2012), gentrification remains intense, as community organizations argue the rapid development D.C. has endured continues to push low-income residents out of their communities.

D.C. natives have turned to the arts to respond to the increased conflicts caused by gentrification, even utilizing go-go music with last year’s #DontMuteDC movement. 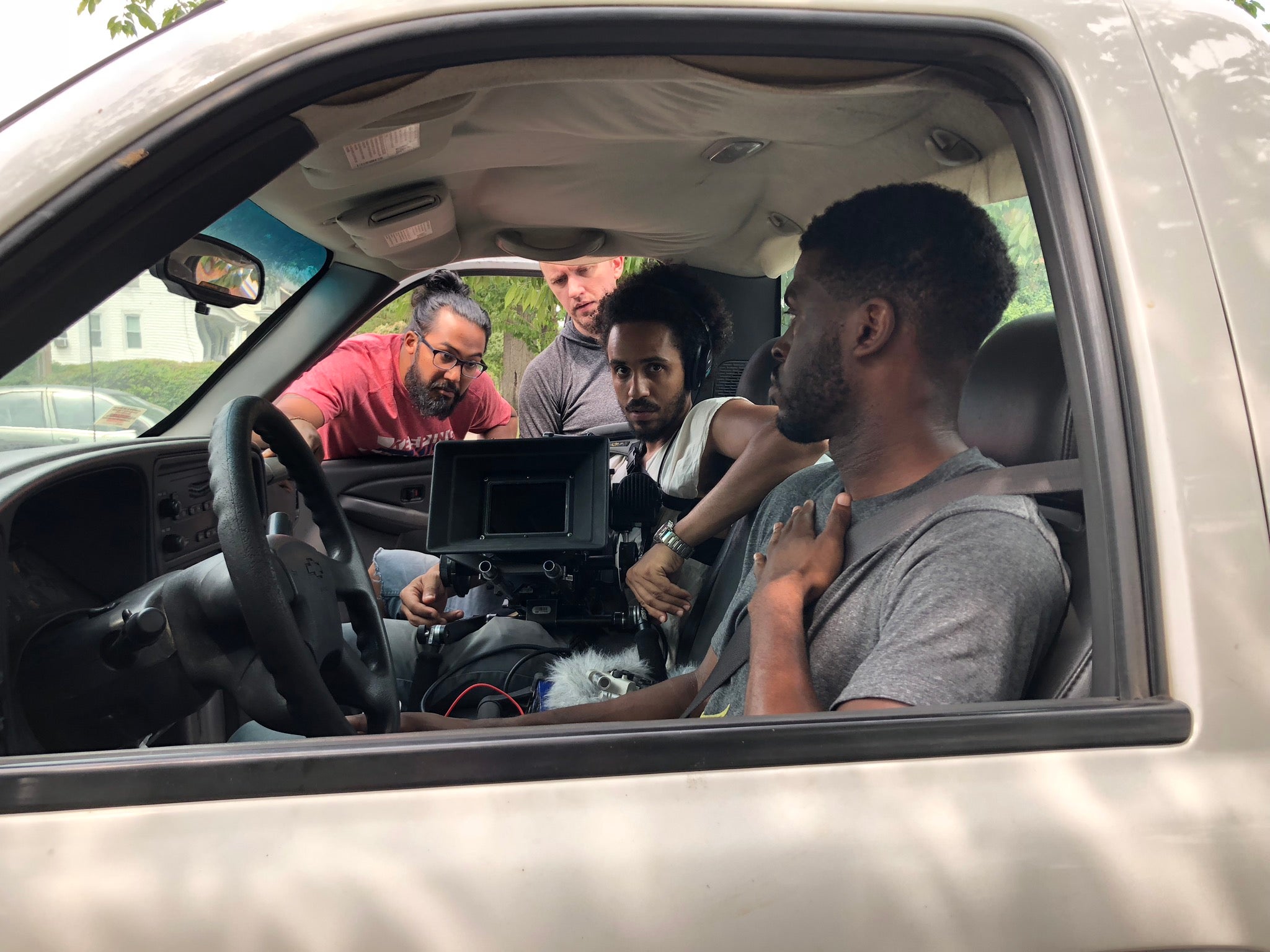 Merawi Gerima, D.C.’s very own and the son of acclaimed independent filmmakers Haile Gerima and Shirikiana Aina, makes this ongoing issue evergreen with RESIDUE—his feature debut acquired by Ava Duvernay’s ARRAY. “We probably wouldn’t be distributed if it wasn’t for them,” Gerima shares. “Let that explain the state of the film industry today.”

In the film, we follow Jay (Obinna Nwachukwu)—an aspiring filmmaker who returns to his native D.C. neighborhood that’s gentrified beyond recognition. While he re-acclimates with his community with the hopes of leaving with a script, Jay is challenged with alienation from his childhood friends, disturbed by the disappearance of his best friend, and unsure about how he fits in. RESIDUE is Gerima’s personal time capsule of how one navigates identity, isolation, and loss.

Just before the film debuted on Netflix, it took home the Audience Award for Best Narrative Feature and the Acting Award at the 2020 Slamdance Film Festival in January. RESIDUE was an official selection of the 77th Venice International Film Festival’s Giornate degli Autori—which is where Gerima was heading back Stateside from when we touched base with him for an in-depth conversation about his film.

This interview has been edited and condensed for clarity and length.

Can you touch on your experience capturing the essence of returning home and it not being what you remember it to be?

MERAWI GERIMA: Growing up in D.C., it’s easy to undervalue its natural beauty, the community around you, the people; the culture. Growing up, I felt that D.C. was a concrete jungle. When I left, I did tell people that I was never coming back, but it wasn’t until [then] that I really took the time to reflect, especially in L.A. The west coast is so different. When I drove back to D.C. to shoot the film, I noted the brown, arid region of the west coast and the yellow fields of the midwest, and coming into the east coast is so green, verdant, and lush—just full of life. It’s actually not a concrete jungle at all; it’s an amazing city built on swampland. In the filming of it, we were doing our best to show just that—the inherent beauty of the place and the people. The D.C. accent is so pivotal to the film.

GERIMA: My man Dennis Lindsey plays Delonte. That man embodies Southeast D.C. and that’s critical. There’s an interesting play. Obinna Nwachukwu, who plays Jay, grew up in Maryland so he’s a step removed from the heart of the accent. And it plays well for this character who’s just coming back home—to enhance his alienation.

For me, it was such a pleasure to be working within these aspects of my identity and culture in a free way—not feeling like I had to cater to people, whether they could understand the accents or not. I just had people speaking the language period, knowing at the very least that D.C. would understand.

The film gave me a free license to go 100 percent D.C. and not look back.

Is that why you felt to include footage from last year’s #DontMuteDC moment?

GERIMA: #DontMuteDC erupted in the middle of me editing the film. The editing process took about a year and a half, so when Moechella popped off, I thought there was no way I was missing that. I went down there with a camera—all DSLR and camera phone footage—because I went to go document that to ensure it’s included in the film. Going back to the freedoms that we had, we had a nice, cinema camera while we were shooting during our main production days, but

The post ‘RESIDUE’ Is Merawi Gerima’s Salient Archive On The DC That Once Was appeared first on Essence.